We hope you've said your goodbyes to the 2015/16 year, locked away the precious memories and are as excited as we are in the brand new 2016/17 year!
The first series of events we have planned is the Club Leadership Training (CLT) which is starting in mid July.

We have produced an Online Survey http://tinyurl.com/toastmasters-survey-july2016 and we'd like you to tell us some of your background and expectations for this. The survey will only take a few minutes but the feedback will be very valuable in our preparation to ensure your questions get answered.
CLT's are a brilliant chance to meet the new Division E team and network with the other Club Officers in the region. Bring along any members who are keen to learn more about the Toastmasters organisation. It's also a chance to find out more about your Officer role (assuming it's your first time doing it..  ;) ) However we have plenty of breakout groups in store so hopefully there will be something in store for everyone. The sessions we have will be near identical to Division J team. So feel free to attend any session that suits your schedule. These are all posted on the Meetup website as well. http://www.meetup.com/divisionseandj/
Finally, good luck to all the new Club President's and have an enjoyable time running your first Club Business session! Will see you and your teams in a few weeks time! :) 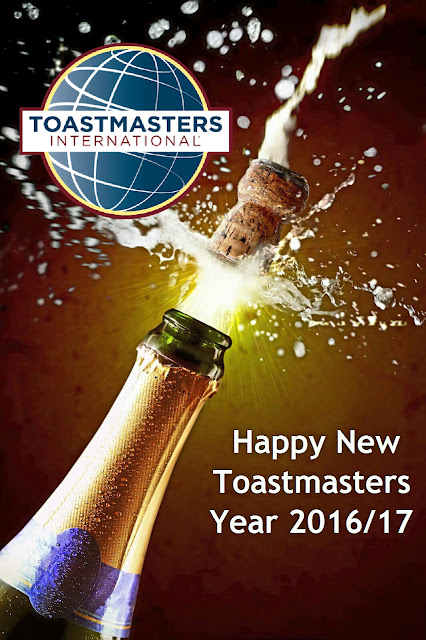 A year of learning

With the 2015-16 E team leaving office this week, we took time to reflect on the things we've learnt this year. Here's some of our combined wisdom.

And the final tip from this year's team...

... together, we can achieve more than any of us could do individually. 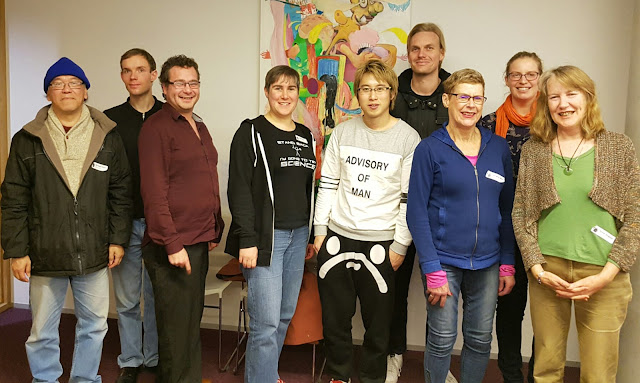 On June 17 and 18, Toastmasters had a stand at the Wellington careers expo. Around 25 local members generously volunteered their time to explain the benefits of Toastmasters to high school students, their parents, teachers - and other stallholders. 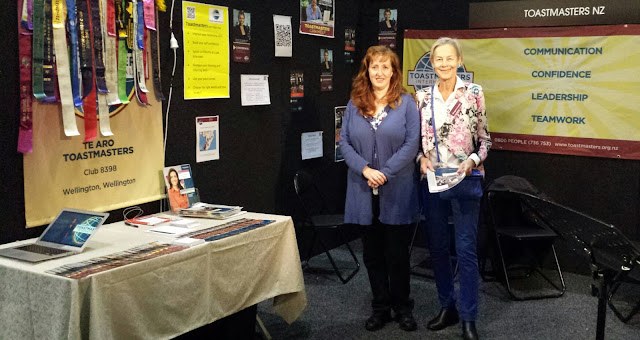 Friday was the most intense day with busloads of students arriving constantly from local high schools. The scavenger hunt activity at our stand proved popular, especially with a candy prize on offer! During the morning we were very pleased to receive a visit from Wadestown School's youth leadership course. Guided by Rob Julian of Capital Toastmasters, the students presented some rousing Table Topics from the expo stage, attracting a lot of attention and interest in Toastmasters. 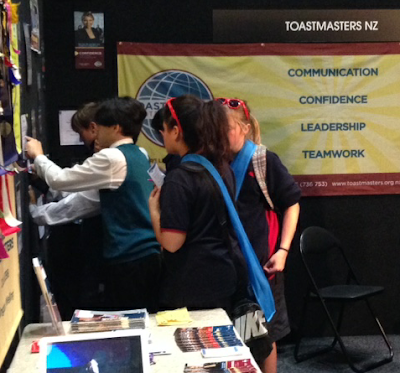 Students search through information at our stand for answers to the scavenger hunt questions.
Photo: Ed Atienza (Te Aro Toastmasters)

On Saturday things were quieter and there was a chance for our volunteers to wander around the expo and speak to other stallholders. That proved to be quite successful, with several staff members asking for information about club meetings near them. As well as Wellington clubs, we fielded queries about clubs in Dannevirke, Christchurch and Dunedin. Just as well we had lots of flyers with the national club finder address!

All in all the expo was a success and very enjoyable for everyone involved. Look out for recent high school graduates visiting your club in the near future.
Posted by Gael at 09:00 No comments:

Here they are folks! Your incoming Division E team - taking office from 1 July 2016. 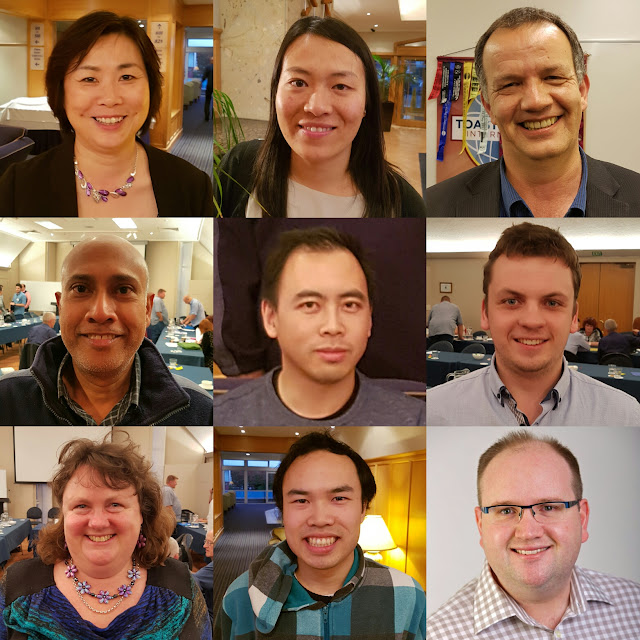 When the dashboards ticked over this morning, they showed something very exciting - 14 distinguished clubs in Division E! That's 40% of the division's club base, which makes us a distinguished division!

Division E is the third distinguished division in New Zealand for this year - after Division H (south Auckland) and Division F (Northland).

Congratulations to all the members, clubs and area directors whose hard work has generated this achievement! Stay tuned - there'll be more good news to come before the year is out...
Posted by Gael at 10:08 No comments:

The sprint to Distinguished District: Is this normal?

With just a few weeks to go in the Toastmasters year, clubs are busily signing up new members and registering their last few awards, making sure they achieve everything they set out to achieve in their club success plan. For many clubs, that means being distinguished (or select distinguished or president's distinguished). While there are many measures of success for a club, hitting the ten goals of the Distinguished Club Program is one indication that your club is healthy and serving its members well.

The administrative groups that support the clubs - Areas, Divisions and Districts - have their own Distinguished Programs to work towards. For example, an Area (a grouping of four to six clubs) is distinguished when at least half of its clubs are distinguished.

So how are we doing? You can see our current progress on the Toastmasters International dashboards. And what's this? We still have fewer clubs, and fewer members, than we had at the start of the year - both of those growth figures are negative at the moment.

At first glance it looks as if we have little chance of being distinguished this year, with our growth figures so low. But never fear! As it turns out, the numbers we're showing at the moment are very normal. In fact, this time last year we were in almost the same position - and yet we ended up as a distinguished district.

The chart below shows District 72's club growth figures for the final three months of 2014 and 2015, compared with this year. All three years show around 5% club loss after the April renewals, and yet in each of the previous two years, club growth reached at least 2% by mid-July. Our 1% club loss today is almost exactly the same as it was at the same time last year and the year before. In both years, club growth lifted in the last few weeks of June as new club sponsors worked to get their paperwork in before the end of the year. Keep an eye on the dashboards - chances are, the same thing will happen this year. 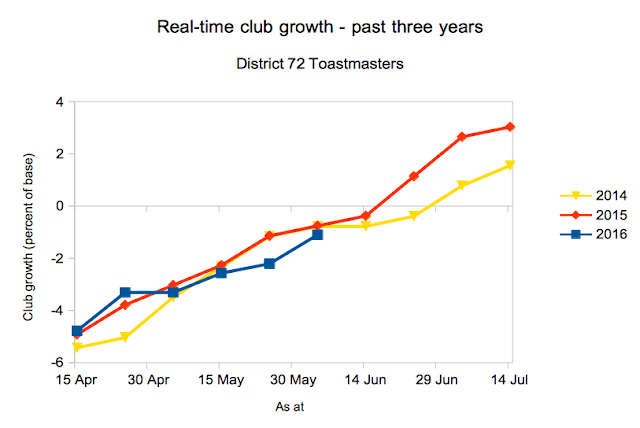 What about membership growth? It turns out that's looking pretty normal too. In each of the past three years we've experienced membership loss of between 8% and 10% after April renewals, but then membership has grown steadily and ended up well above our starting point. This year is no different - clubs are signing up new members at about their normal rate, and the District is likely to end the year much bigger than it started. 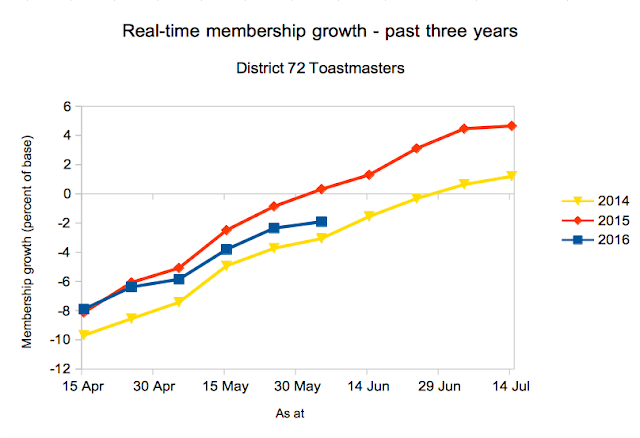 So will District 72 be distinguished this year? Wait and see! There are plenty of clubs in formation that have been working steadily all year with the aim of chartering in June. As they finish off their last administrative arrangements and turn in their paperwork, both club growth and membership growth will lift. And what that means is more fellow Toastmasters - more people building their skills in communication and leadership, and more friends to meet when we visit other clubs or attend conferences. Distinguished is the goal, but sharing the benefits of Toastmasters is the real reward. Good luck to everyone who is working right now to achieve it.
Posted by Gael at 08:30 No comments:

Toastmasters is at the Careers Expo!

Young people entering the workforce stand to gain a lot by joining Toastmasters. Practicing impromptu speaking helps a job seeker prepare for interviews, and developing confidence helps them get ready to put themselves forward for positions. As well, Toastmasters helps people learn to present information clearly and persuasively, which can help a new employee get ready for the workplace presentation that will inevitably happen one day.

To make sure that school leavers can connect with us and get all these benefits, Toastmasters has had a presence at the Careers Expo over the past month. Christchurch and Auckland expos were both in May, and this week, it's Wellington's turn. 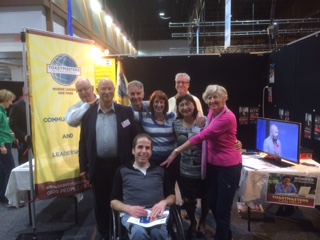 On Friday and Saturday (June 17-18), a team of enthusiastic local Toastmasters will be at TSB Arena, speaking to students and explaining how Toastmasters can help them. We'll be rubbing shoulders with education providers like Victoria University and Weltec, as well as employers such as the District Health Board and the Defence Forces.

The Toastmasters of Wellington are excited about the opportunity. When they were asked to help, responses ranged from "I'm very interested" to one keen person who said "Me! Me! Pick me!". A total of 25 volunteers will be rotating through the stand over the two days - a wonderful turnout that means we'll have enough people to run a few Table Topics sessions on the expo's central stage. Huge thanks to everyone who's offered to spend some time on the stand.

If you know a young person who'll be visiting the Careers Expo, tell them to be sure to visit the Toastmasters stand! We'll have World Champion speeches onscreen, a scavenger hunt/quiz, and lots of information to share. We're looking forward to meeting the next generation of Toastmasters!
Posted by Gael at 09:00 No comments: